Skip to content
Menu
Maxima's Tip of the Week

The Economics of Inflation and M&A

Inflation has recently gone from a somewhat mysterious economic issue barely worth any interest for the non-economist to an in-your-face problem that cannot be ignored.

Inflation hit 6.8 per cent in April, the highest in 30 years.

We need to talk about what inflation means for your business performance, exit planning, and M&A objectives.

The first thing we should clear up to clear up is the reason for accelerating inflation. Without understanding the basic dynamics of the monetary system, one can understand neither the current situation nor expected outcomes. Inflation, which we think of as broadly rising prices across the economy, is not happening because of “supply chain disruptions.”

It is not because of Putin’s invasion of Ukraine.

It is not because of “greedy capitalists.”

Massive expansion of the money supply.

Ottawa has engineered this situation by selling debt (bonds of varying maturities) to its own central bank, the Bank of Canada.

During the virus panic, governments put the shackles of haphazard “public health restrictions” on economic activity and Ottawa’s spending went into hyperdrive. To give some context, the Trudeau government’s deficit was more than its entire budget the previous year.

We can see the outcome of this by looking at the Bank of Canada’s balance sheet over the last several years. 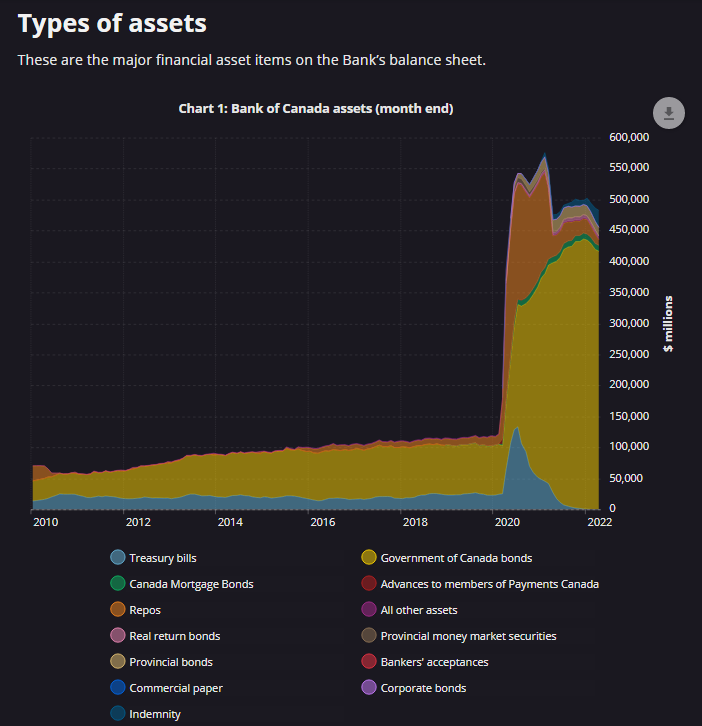 This is a truly massive expansion of the central bank’s balance sheet, all made possible by the creation of new money to finance the federal government’s unprecedented deficits.

How will it affect your business?

We care a lot about inflation in the M&A world. Every calculation we do about the value of your business is influenced by the expected rate of inflation.

In the abstract, all the talk about “price levels” obscures how inflation moves through the economy.

New money can only enter the economy at specific points at specific times. In other words, some people receive the new money first, and so they get to spend new money at the “old” prices (this is typically the financial sector and politically connected sectors).

This implies an increase in wealth for these people. However, as the money circulates, economic actors are continually bidding up prices – actual production has not increased, so there is “too much money chasing too few goods.”

Meanwhile, some are waiting for their incomes to rise, yet they are buying things at the “new” prices, so the effect of inflation is their relative impoverishment for them.

What does this mean practically speaking?

For some businesses, inflation will be positive. Their selling prices will increase faster than their costs.

For other businesses, inflation will be negative. Their costs rise faster than their selling prices.

Now what does it mean for the value of your business?

The Effect of Inflation on Valuation

All of these are dramatically affected by inflation, but we will focus on the first three.

Inflation may increase revenue growth, but this is not necessarily beneficial if operating margins are under pressure at the same time. As mentioned above, it depends mainly on how much rising expenses correspond to higher revenues. Inflation might allow you to sell more because your customers are benefiting from the new money. It might allow you to increase your prices. But rising costs might keep you from getting much net value as a result. Between rising revenues and rising costs, margins might increase or decrease, or might stay more or less the same, but the business has at least some control over these issues.

However, an individual business owner has almost no control at all over interest rates, and interest rates significantly influence cost of capital calculations. This is a principal element in figuring out much one should pay now for cash income in the future.

There are three main factors for cost of capital. First, there is the basic time value of money. We prefer goods now to goods later – that is why we have interest rates (if we need to wait to get paid, we need a premium).

Then there is inflation. Investors and lenders fear a depreciating monetary unit – that is, price inflation. To compensate themselves for this expected (normal) falling purchasing power, they demand a higher return, so interest rates are bid higher.

However, if the central bank responds to higher inflation by trying to raise interest rates, the strain on capital markets creates recessionary pressures, which themselves push interest rates lower than otherwise.

The net result of inflation is necessarily higher interest rates, all things being equal. And when interest rates rise, asset prices fall. Therefore, inflation must be regarded as generally detrimental to the valuation of a business. This is because it leads to higher interest rates or a recessionary adjustment when the central bank contracts the money supply to suck some dollars out of the system.

Inflation and interest rate uncertainty will be a major concern for the economic system and business owners for the near future.

With our clients, we are seeing mixed results in terms of valuation. While interest rates are increasing, for some businesses the negative impact of this has been offset by improved financial performance.

The best way to find out how inflation is affecting the value of your business is to talk to an advisor and get a valuation done.

Facebook
Twitter
LinkedIn
PrevPrevious3 Ways To Flip Repeat Customers Into Subscribers
NextAre You Building a Business, or Doing a Job?Next

MAXIMA is a M&A Advisory firm that specializes in helping companies with their goals, whether it’s buying or selling, primarily in Western Canada but with an expanding market presence throughout Canada and the USA.